You can view, browse and interact with the digital version of the Medieval copy of the map using resources below, definitely a unique and intriguing map, a masterpiece yielding unique insights into the Roman Empire and ideology: A copy of this mapping  masterpiece, the original is stored in Austria, is used to illustrate Michael Wood’s new BBC documentary told as  ‘ a People’s History. ‘ There are lots of interesting objects artefacts and maps used during the programme. Many are worthy of further exploration for history buffs. This is definetely one of them. You can explore it online using the pointers and resources linked below. The only Map of the Roman World and Empire to have survived from ancient times,  it is a precious document which is a parchment scroll from the Medieval period. 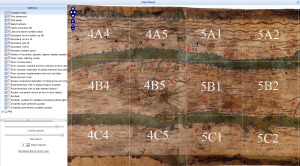