The BBC’s Empire Timeline provide a great way to visualise not only the major events of the history of the British Empire in chronological order but it also basically maps the movement and geography in simple terms alongside the timeline. 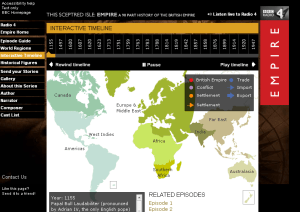 If you would like to explore further resources and articles about the British Empire then take a look on this site and also on our FREE Resource Intriguing History. Across both sites our Historical themes of Business trade and Industry, Empire and Colonialism will enable you to find additional resources ideas and tools and how to guides.