Family historians are very comfortable using the Census returns from the C19th and C20th .

They are one of the most important tools available but there is so much more that can be extracted from the return if, we examine what the government does with the return, after it has collected them all in

In our own family research, we use the census material to chart our own families, changing socio economic position over time.

However, by examining the results for the national and local data sets, so much more rich historical context can be extracted.

This is not about finding material for the individual but about national and local derived material.

Here is an example of the sort of information such a data set can reveal: 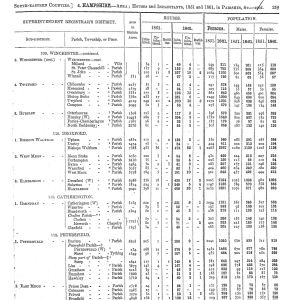 Hampshire County comparative data . This page contains derived data for the county of Hampshire collected from the 1851 and 1861 census returns. For each parish the  number of males and females can be compared, as well as the number of houses inhabited or uninhabited.

Another part of the census collection process that is often overlooked is the importance of maps and resultant map making, that emerges from the data.

Used in conjunction with the census record of a household in your family the enumerators maps offer a fascinating extra dimension to your research.

The collection of census and BMD data was a critical step on the road to Britain fully reaching it’s full economic and social potential as the C19th rolled into the C20th.

To explore the British Population Reports click on the link. Browse using locational data. There is a huge anount of material so we will be exploring different aspects of it in other Toolkit posts.