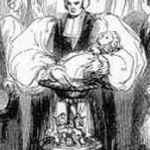 From cradle to grave, the state makes sure it has us all accounted for. Nothing much has changed in the last five hundred years and as family historians we all rejoice in this because this is how we come to know our ancestors. Understanding parish registers is an important tool for all historians.

The introduction of pre-printed registers for burials and births in 1813, make the whole task of finding out information so much easier

The new baptism form had the title of the parish at the top and then room for eight entries per page. The information recorded includes:

In the case of a child born illegitimately then the recorder might have added the name of the supposed father but more often than not the father column was left blank.

Extra detail was sometimes added, particularly if the death was slightly unusual or had been part of a larger epidemic to strike a parish. Suicides were also commented upon. If there was a struggle to pay for the burial that might also have been mentioned.

These registers are easier on the eye and contain much more organised data than that which went before and the need to ‘tick’ the boxes meant there was less chance of vital details not being included.

← What can be Gleaned From The Post 1754 Marriage Registers?
Brilliant Map Warper at New York Public Library →